The weapons and military equipment left behind by the U.S. withdrawal from Afghanistan, including through the collapse of the Afghan army, are now largely in the hands of the Taliban – and likely other militant groups as well. Though many politicians’ and observers’ reactions have been sensationalized, it does highlight significant problems arising from U.S. arms transfers during the two-decade-long War on Terror.

Despite U.S. and international efforts to control the spread of military equipment, the U.S. has a long history of leaving weapons behind and questionable arms transfers. As a result, U.S. weapons ended up in the arsenals of adversaries in Iraq and Syria, as well as Afghanistan, even before the U.S. pulled out completely.

As a result of both abandonment and poor tracking, the Islamic State group, the Taliban, and other militant groups managed to acquire American-supplied anti-armor weapons, tanks, drones, and massive numbers of small arms, like rifles, and light weapons, such as machine guns and basic rockets.

This equipment was often subsequently used against U.S. forces or their allies, and sometimes recaptured after battles.

For years, the Taliban have been acquiring U.S. weapons, relying on corrupt Afghan officials and troops selling U.S. equipment, capturing weapons in battle or stealing them in raids. The sudden collapse of the Afghan army provided a uniquely large windfall. 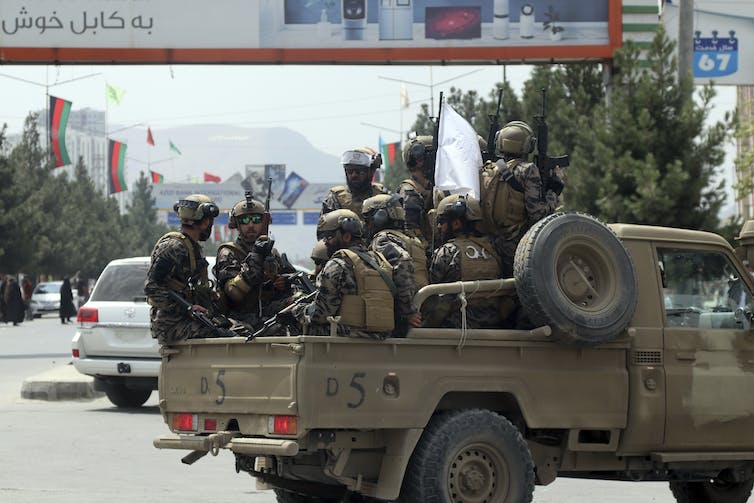 Many of the more advanced weapons and equipment may not prove useful to the Taliban, because they are too complex or require special maintenance – or were damaged or destroyed by U.S. forces before they left.

However, easier-to-use high-tech equipment, such as communications instruments and night vision goggles, will help the Taliban. Some of this gear has already been used by the elite Badri 313 unit as they guarded key sites, such as the Kabul airport.

The Taliban could also share their weapons with other militant groups, such as the Tehrik-i-Taliban Pakistan and al-Qaida. Those groups are already threatening the security of people across the region.

Several U.S. government programs are aimed at stopping weapons from getting to adversaries. Whether running through the Defense Department or the State Department, they rely on what is called “end-use monitoring.”

Those efforts seek to ensure that when other nations’ military forces get U.S. weapons, they are kept secure both in transit and once they arrive at their destinations. U.S. officials are supposed to help recipients receive and store the weapons or equipment and distribute them to soldiers or other authorized personnel. Those officials are also supposed to keep careful records of which weapons are transferred to which foreign forces, and track them overtime to make sure they are being stored securely – and fix any problems that arise, or even stop the weapons transfer from continuing. 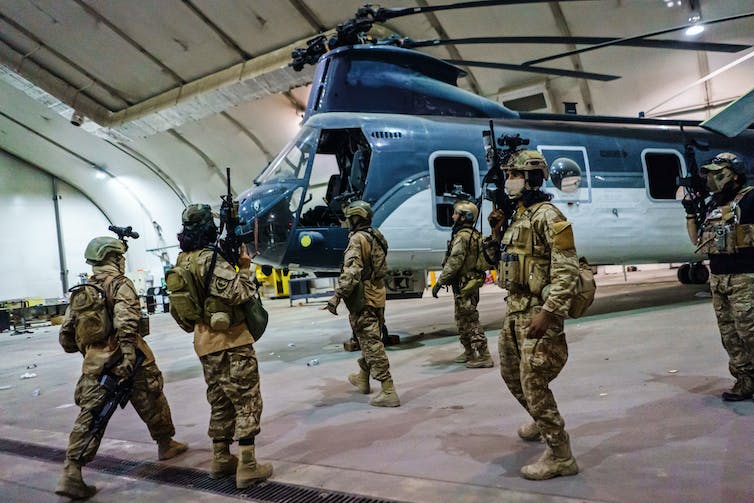 But evidence shows that many arms transfers to foreign partners in support of the War on Terror lacked these basic end-use safeguards. In one instance, starting in 2007, U.S. officials in Afghanistan took 15 months to set up the required tracking system for weapons and equipment delivered to the Afghan army. In that time, some equipment, including night vision systems, were lost – presumably to the Taliban.

In another instance, a 2007 Government Accountability Office report found that military and other government officials in Iraq did not know where massive amounts of small arms, light weapons, and equipment had gone. They were supposed to have been given to the Iraqi army, but the untrained staff and poor distribution networks meant nobody had any idea if any of it had actually been delivered – or whether it was stolen or even lost somewhere along the way.

Despite military promises to do better, the problem continues. U.S. government audits and investigations have found that the safeguard processes were not followed in transfers of drones to the Afghan military, as well as countless weapons transfers to the Iraqi military and other forces involved in the fight against the Islamic State group in Iraq and Syria.

If the proper procedures had been followed, they could have at least reduced the number of U.S.-supplied weapons in the hands of the country’s enemies.

Additional protections could help as well. Even before they agree to arms transfers, U.S. officials are supposed to consider whether their foreign partners can guarantee that the weapons won’t fall into enemy hands. But political pressure for fast results in violent situations and competing strategic priorities frequently mean weapons are given to groups who can’t reliably secure them.

By not following through on existing accountability and security procedures, the U.S. has contributed to the groups and conflicts its weapons transfers sought to quell.